Facebook co-founder Sean Parker bankrolled Brigade to get out the vote and stimulate civic debate, but after five years and little progress the startup is splitting up, multiple sources confirm to TechCrunch. We’ve learned that Pinterest has acqhired roughly 20 members of the Brigade engineering team. The rest of Brigade is looking for a potential buyer or partner in the political space to take on the rest of the team plus its tech and product. Brigade CEO Matt Mahan confirmed the fate of the startup to TechCrunch.

While Brigade only formally raised $9.3 million in one round back in 2014, the company had quietly expanded that Series A round with more funding. A former employee said it had burned tens of millions of additional dollars over the years. Brigade had also acquired Causes, Sean Parker’s previous community action and charity organization tool.

After Brigade launched as an app for debating positions on heated political issues but failed to gain traction, it pivoted into what Causes had tried to be — a place for showing support for social movements. More recently, it’s focused on a Rep Tracker for following the stances and votes of elected officials. Yet the 2016 campaign and 2018 midterms seem to fly over Brigade’s head. It never managed to become a hub of activism, significantly impact voter turnout, or really even be part of the conversation. 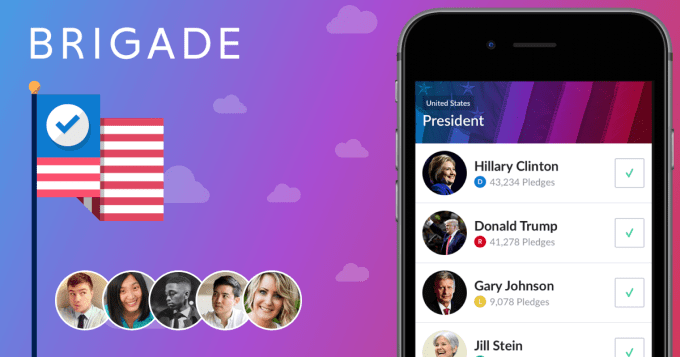 After several election cycles, I hear the Brigade team felt like there had to be better ways to influence democracy or at least create a sustainable business. One former employee quipped that Brigade could have made a greater impact by just funneling its funding into voter turnout billboards instead of expensive San Francisco office space and talent.

The company’s mission to spark civic engagement was inadvertently accomplished by Donald Trump’s election polarizing the country and making many on both sides suddenly get involved. Facebook and Twitter weren’t necessarily the most organized or rational places for discourse, but it started to seem unnecessary to try to build a new hub for it from scratch.

Brigade accepted that its best bet was to refocus on govtech infrastructure like its voter identification and elected official accountability tools, rather than a being a consumer destination. Its expensive, high-class engineering team was too big to fit into a potential govtech acquirer or partner, and many of those staffers had joined to build consumer-facing products, not govtech scaffolding.

Mahan, Brigade’s co-founder and CEO as well as the former Causes CEO, confirms the breakup and Pinterest deal, telling us “We ended up organizing the acqhire with Pinterest first because we wanted to make sure we took care of as many people on the team as possible. We were incredibly happy to find that through the process, 19 members of our engineering team earned offers and ended up going over to Pinterest. That’s about two-thirds of our engineering team. They were really excited about staying in consumer product and saw career opportunities at Pinterest.” We’re still waiting on a comment from Pinterest. 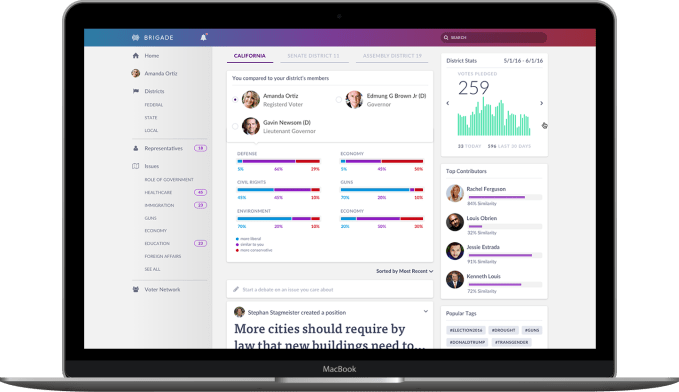 Brigade had interest from multiple potential acqhirers and allowed the engineering team’s leadership to decide to go with Pinterest. Several of Brigade’s engineers and its former VP of Engineering Trish Gray already list that they’ve moved to Pinterest in the past few months. “We had a bunch of employees that took a risk on a very ambitious plan to improve our democracy and we didn’t want to leave them out to dry” Mahan stresses. “We spent more time and more money and more effort in taking care of employees over the last few months than most companies do and I think that’s a testament to Sean and his values.”

Mahan is currently in talks with several potential hosts for the next phase of Brigade, and hopes to have a transition plan in place in the next month. “We’ve in parallel been exploring where we take the technology and the user base next. We want to be sure that it lives on and can further the mission the we set out to achieve even if it doesn’t look like the way it does today.” He insists that this isn’t a “tail between our legs situation” for Brigade and Parker. “Brigade built a lot of foundational technology such as high quality voter matching algorithms and an entire model for districting people to their elected represatives. My hope for our legacy is that we were able to solve some of these problems that other people can build on.” Given Parker’s previous work with Marijuana legalization campaign Prop 64 in California and his new Opportunity Zones tax break effort, Brigade’s end won’t be Parker’s exit from politics.

Brigade’s breakup could still cast an ominous shadow over the govtech ecosystem, though. Alongside recent layoffs at grassroots campaign text message tool Hustle, it’s proven difficult for some startups in politics to become sustainable businesses. Exceptions like Palantir succeed by arming governments with data science that can be weaponized against citizens. Yet with the 2020 elections around the corner, fake news and election propaganda still a threat, and technology being applied for new nefarious political purposes, society could benefit from more tools built to amplify social justice and a fair democratic process.